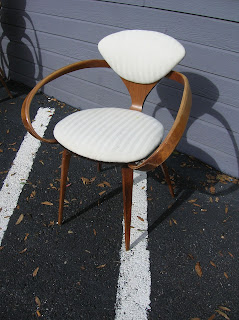 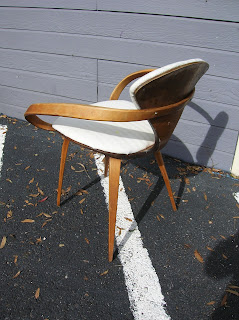 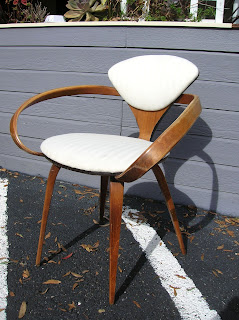 I received a phone call yesterday inquiring as to whether or not I purchased items. The seller had what he described as a 60's Plycraft chair. Sure, come on by and I'll take a look! It was all I could do to keep my jaw from hitting the ground when I saw what was being offered! Yup, an honest to goodness Plycraft pretzel arm chair in bent beech. Original label Plycraft designed by Cherner! The frame was a bit scuffed and the upholstery had been changed at some point and needed to be again and it was missing some of its original screws, but in overall in very good vintage condition. There were no splinters and the frame was solid!
But that was only the start! Having just this one chair would make me smile but having a pair would make my day! 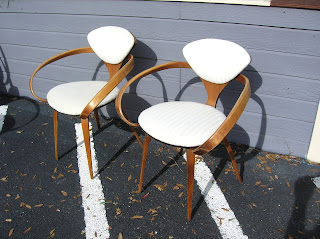 And a set of 4 of these would just be too much to ask for! 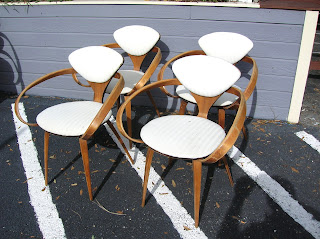 But a complete set of 6 of these almost set off of a heart attack! 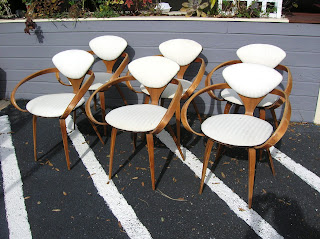 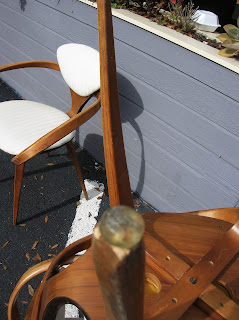 All the original clear plastic taps were still intact on every single leg and although 3 of the chairs were missing their labels the other 3 were still in place. Everyone of these is structurally sound and in relatively great condition! 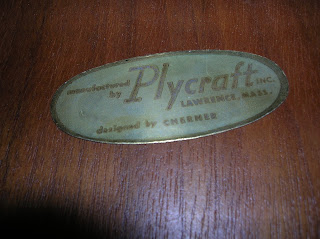 This a rehab project I could only dream of! I think the frames will clean up nicely with only a bit of "patina" left to show they're the real deal and I know I can do the upholstery work myself!
This may not qualify with finding a Picasso in a Goodwill but it's a close second and they walked right in my door! Thank you Santa!
Merry Christmas to you all and a Happy and prosperous New Year if I don't post from now till then!
﻿
Posted by A Modern Line at 2:06 PM 15 comments: