Let me start by saying I'm not a huge fan of the 50's blonde furniture as a rule. Although some of the pieces have some nice lines, they are not in high demand for most people and seem to need more work than the later darker danish pieces. Usually heavy veneer damage and more stains to contend with than is worth the time and effort. Sadly, most end up in landfills. It's kind of a shame because these were still better quality than most of the furniture manufactured today.

However there are exceptions to every rule and so is the case here. I needed to redeliver my recently refinished H/W Kohinoor dresser and mirror across the bay to my client in St. Pete, and with a list of all the thrifts on hand I checked in with the CL postings in the general vicinity. I like the new format on CL that shows thumbnails of the lead pic. Helps sort the trash from the possible treasure quite a bit faster! Hmm...that looks interesting! 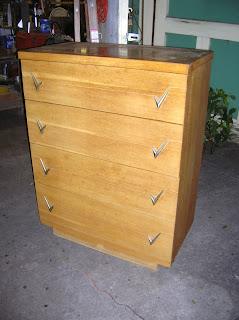 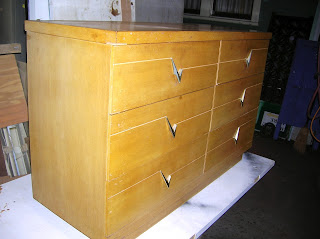 I called the seller to set up an appointment and it would have to be later in the day. The listing was 2 days old and the price was more than I was really comfortable with. The dresser came with a beveled mirror and the chest was also shown with a mirror attached. The mirror attached to the chest was not original and I left behind as it was nothing special.
I really fell head over heels on the great lines and those flying 'V' pulls on the drawers. Yes, I did pick these two pieces up against my better judgement. And the seller would not budge on the price as they had another possible interest. Did I mention the swell drawer pulls! 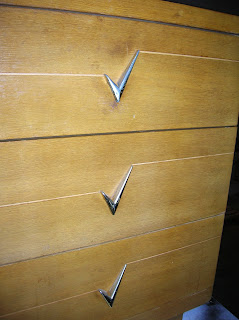 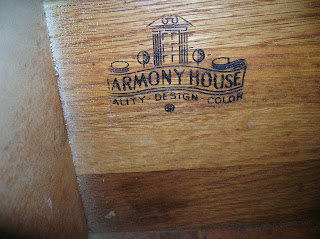 As much as I tried to talk myself out of this, (do you really need any more projects?) I couldn't resist! According to my research Harmony House was a Sears brand sold from 1940-1968. When I pulled the mirror plate off the frame the date confirmed that this was indeed mid 50's. 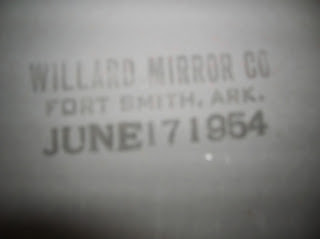 As the plate was manufactured in 1954, I'd guess the pieces were circa either 1954 or 1955. Even though I tried to look these pieces over really well before comitting, I still found plenty of loose and chipped veneer getting them loaded. Thankfully there weren't too many stained areas and they didn't appear to be too deep. Before starting, the existing loose veneer had to be stabilized. The base aprons were the worst and it was just about a lost cause. Even while I was in sanding mode, I had to constantly stop and refix areas that broke loose. 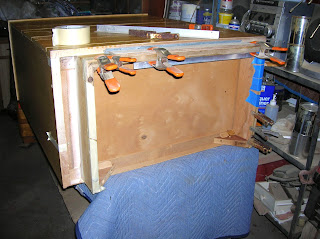 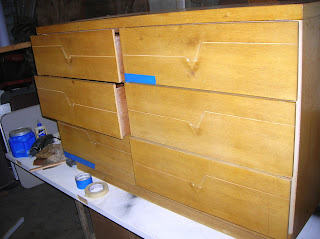 And that finish that looked so dry and ready to fall off managed to be as much work as any Heywood Wakefield piece that I've worked on! My enthusiasm was starting to ebb a bit and I was mentally kicking myself and wondering exactly what I planned to do with this next. There was no way this was going to look anything like it did when we met. 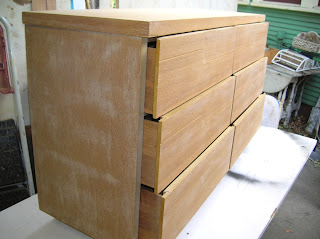 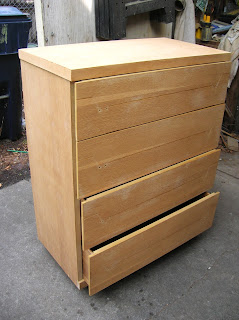 After the first sand there was still a ton of embedded toner in the veneer that seemed to take forever to remove. I thought for sure I'd end up eating through this, but it held up pretty well. The veneer looks like it could be a lighter mahogany. Very fine consistent grain. As this was going much slower than anticipated, I had plenty of time to think about where to go now.
The main attraction of these pieces were the drawer pulls and the routed lines in the drawer and these needed to be showcased. I was already comitted to these being done in a darker stain so I needed the routed areas to stand out. The base aprons on both pieces were really too rough to stain. Solution? Paint the base aprons black along with the routed lines in the drawers before the final sand and stain. I think I'll go with black for the mirror frame as well for accent! 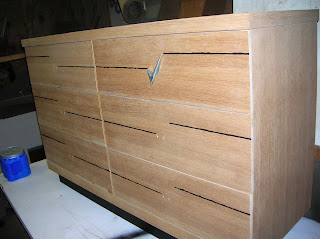 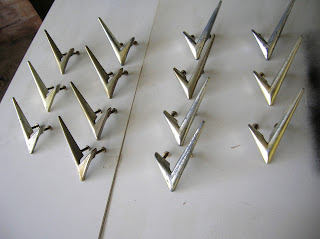 And that fleet of rockets? Yes, they are going to need a fresh look. They are missing most of the plating and need to pop to give the finishing touch. Can you see where I'm going with this? I hope this turns out somewhere near what I envision. Ready to see the finished pieces? Me too, but they're not done yet, so you'll have to check out the next post.

In the meantime, here's the Heywood Wakefield M144 Kohinoor dresser that just went home. I noticed in re-delivering the dresser that my client had a king size bed with no headboard. Seemed kind of a shame to have a complete H/W bedroom and no headboard! Hey, I have a solution for that! I just happened to still have a M790 king storage headboard on hand and it could surely be refinished in "wheat" to match all the rest of the room. Yup, you guessed it! Sold! And they still have a chest that needs to refinished after I finish the headboard. Looks like I have my hands full for quite awhile going forward! 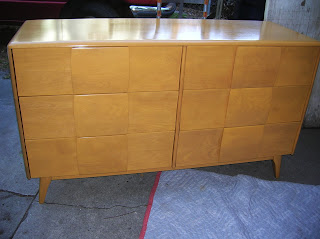 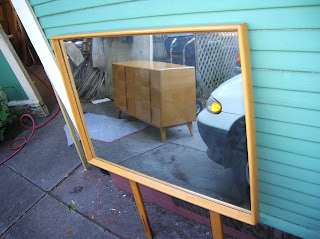 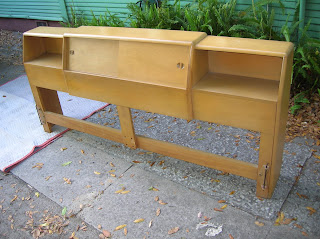 Thanks as always for taking a look and feel free to comment or let me know if you have any questions. Next up...The exciting conclusion to our atomic 50's pieces.﻿