Got a chance to start working on the sons this weekend. Actually Monday as that's part of my particular weekend but who's counting days off. Got both dissasembled and ready to start stripping. As it turns out both had some structural issues and one in particular that I hadn't noticed earler. Some fracturing of the bottom shelf to the sides that someone had rescrewed but at least it's not in the visible area of the finsihed product so no big deal overall. Someone had attemped to relocate the legs but did a poor job and did the piece no favors in the attempt. 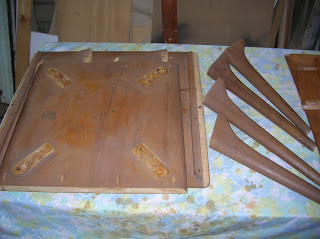 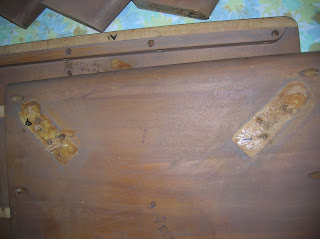 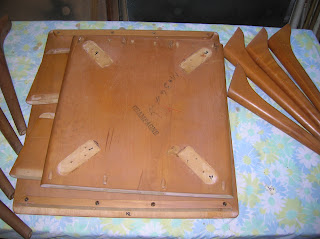 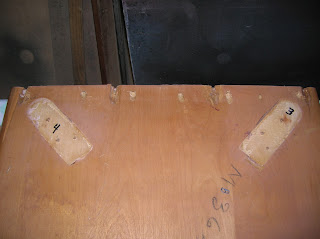 In my experience I would guess these tables were manufactured at different locations or at totally different time periods.This table was produced from 1950-1955 and although the main plant was in Gardner, Mass they had several other plants as well. The champagne piece has a hand inscribed identification and the sable one is stamped with it's number although not a finish as is the champagne piece. One is dated but the red stamp (common to the all other date stamps I've seen) is illegible. These date stamps remind me of the old stampers seen in the library books and don't hold up well over the years although some have survived time and wear and are clear. 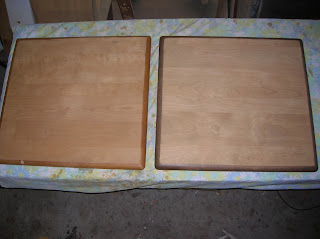 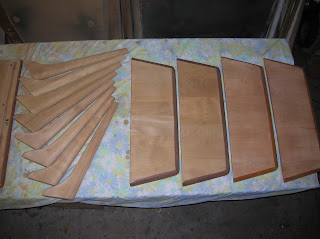 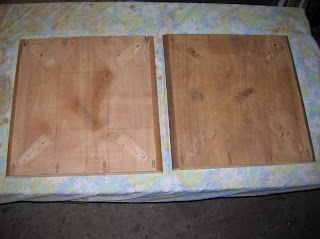 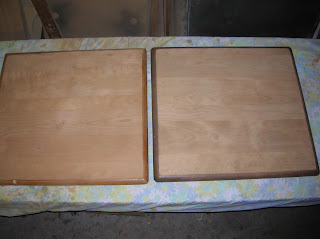 First sand is done and the twin sons are starting to look a little more like the twins they are. Some staining issues with ink or oil on one and may consider bleaching both to try and rectify but will wait until after we hit both again with the next sand.
If you love the furniture and really enjoy seeing it come back from the dead and have worked as many pieces as I have you come to realize that no two are the same when it comes down to bringing them back. That's the adventure and the challenge. I hope to post the finished pieces up within the next week along with some killer pics of the Sputnik lights with their proper bulbs and hopefully some more MCM fun stuff. Thanks for takng a look!
A Modern Line﻿
Posted by A Modern Line at 9:17 PM 1 comment:

Finally have this really nice mid 60's Broyhill Premiere room divider ready to go. Had to refinish the top of the base due to someone sliding stuff around and drips, drops, wear and tear and it all worked out as planned. Nearly perfect condition! Hope to have some space soon in the store to display properly but here's a couple of pics. Really stunning as it's finished front and back with the same pattern both sides. 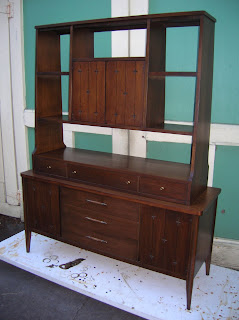 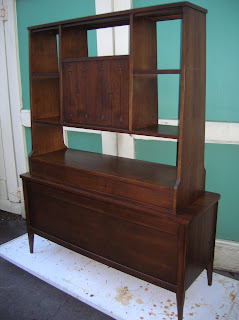 This actually got picked out of an antique mall that was using it for display along with the Lane console table from the last post that had a bookcase stacked on top of it. As much as the thrifts and other spots might seem to be great options, don't overlook perusing the antique malls from time to time as they don't seem to have much love for the MCM pieces that We all love. Some of our better pieces have been found in these haunts.
Still haven't received the bulbs for the Sputnik lights but they are going to be stunning when ready!
Decided to bypass the Heywood Wakefield china I had intended to start and go ahead and take care of a hopefully faster and easier project. A pair of M364G trapezoid lamp tables. These I will affectionately call twin sons from different mothers as they were picked up from definetely different backgrounds and use. 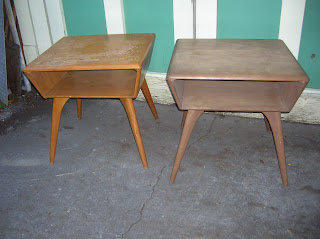 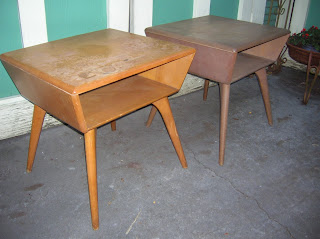 The one on the left was originally finished in champagne although it's hard to tell in it's current condition. The one on the right is sable and although in better finish condition it has some constuction issues as at least one of the legs has been ripped out of place and will require a little work to stabilize and make right. Here's a couple of top shots to see how these look before I get started on them. 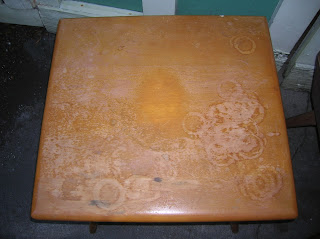 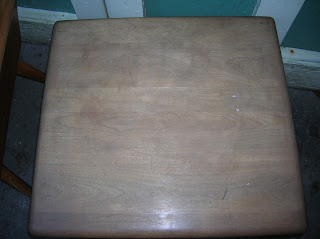 The champagne one is in particularly rough shape but not as bad as some pieces I've worked on (see earlier posts). I hope to get these both to match perfectly in champagne finish and will post some "after" pics when completed and some pics of the Sputnik lights up and ready to move on to a new deserving MCM lover. If you are a fan of Heywood Wakefield in either the collecting or refinsihing vein I would encourage you to post/comment or ask questions if I can be of any assitance. Hope to hear from you and post again soon!
A Modern Line
amodernline@gmail.com.
Posted by A Modern Line at 10:20 PM No comments:

Finally finished the H/W M166G table and have in house now. All in all a much easier refinish job than most H/W pieces. Looks great with the bowtie chairs I had done earlier and priced to find a new home soon. Really nice vintage fabric for the seats is perfect for this set. Only had enough for the 4 chairs though.... 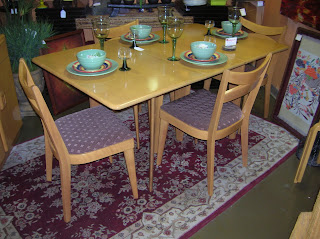 I recently refinsihed 4 stingray style chairs for a neighborhood freind in wheat that were the same wheat finish I had used on a table that I had traded to them for the price of refinsihing. They were originally champagne but I always take down to bare wood and have never had a compatibility issue until now. The chairs were noticeably darker than the finish on the table and although I've primarily rectified the problem adding coats of champagne on top of the wheat finish it has been a real fight to make this right. I might still have to work a bit more to make perfect but want everyone happy as my reputation is on the line for every job. If I can't use you as a reference I've need to step up my game and that has never happened. Here's the set. 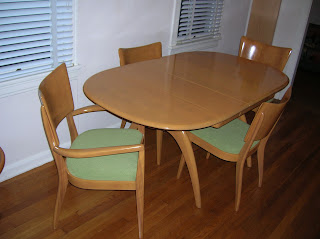 My wife took a road trip out of Tampa heading north up 75 and found some nice picks about an hour out including a very nice Broyhill room divider (to be pictured later as I'm still working on) but didn't think she could fit in her van so I had to go and retrieve a couple of days later with my truck.  As it turns out it was worth the trip as I found this really nice late 60's early 70's Lane console table, a great bent teak wood table lamp and a Sputnik flush mount light. We have the proper bulbs ordered and hope to get in house soon. Sweet!!!!!!!!!!! 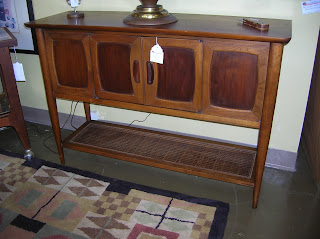 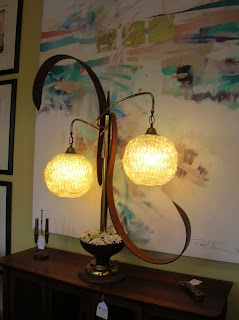 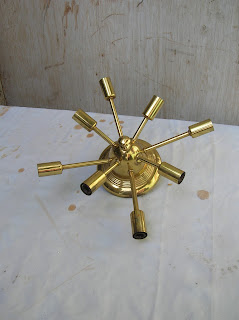 If you refinish H/W and have problems with finish compatibilty issues I'd like to hear from you as to how you resolved. I've been using the same supplier for years and have never had any issues and suspect it's an age/wood selction from the original factory that's causing these issues. The particular chairs and table in question were from different locations and purchased separately.
Coming up soon, another Sputnik light and a great Broyhill room divider along with more MCM fun! If your following from out of town make sure you stop by and say HI! We finally have our website up and running for all you none FB types at www.kaleidoscopeforthehome.com.
P.S. here's a link to another MCM site that's fun to follow and someone that has more time than I do to post all the fun stuff.
Posted by A Modern Line at 10:21 PM 1 comment: