Our new (?) Telefunken finally made it to the store in all it's glory! That and an update on the not so recently acquired Adrian Pearsall dinette set...

There's hardly anything I love more than saving a great piece of furniture and being able to bring, particularly mid century modern items, back to life! I literally live for this stuff and here's the newest success story.
My recently acquired early 60's Telefunken stereo console was just gorgeous for the cabinet alone and the stereo seemed to function just fine. Just had a turntable issue which has now been resolved.
I went ahead and turned it over to a local audio shop and now pretty much eveything on this is up and running nicely! 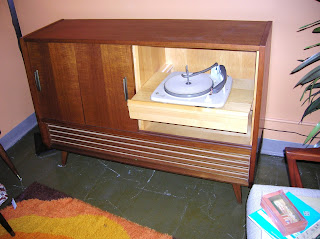 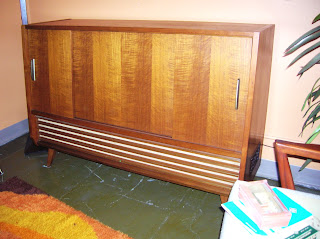 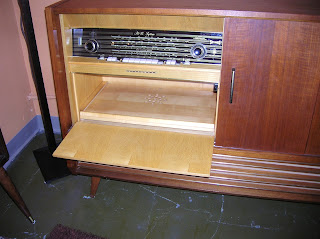 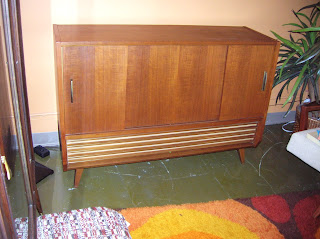 The cost of the repair work was more than the price of the unit, but I think worth the investment.
A month or better ago I had told the tale of bringing in some great Adrian Pearsall pieces at the behest of a consignor. I advised up front that getting these up to speed could be a bunch of work to sell and it was coming off the sale price. Well, the slat bench went pretty quickly and I still have a couple of pieces still in the store in what appears to be the the original ebony finish, but the dinette set had been lanquishing in storage waiting for my attention. 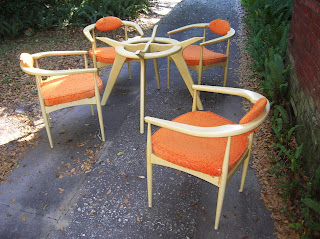 My consignor was under the impression these were of an original and a rare finish. Although a very stunning design, I seriously doubted it's originality. The finish covered the bottom steel taps on the chairs and table (this would have been the last application from the factory after finishing)
and the installation screws were mismatched attaching the backs to the frame. There were also more staple holes in the wood than what I ended up pulling the fabric off the seats and backs. More proof that these were not original! Not that I planned on keeping the same finish, just a bit of justification for taking some liberty with these pieces. 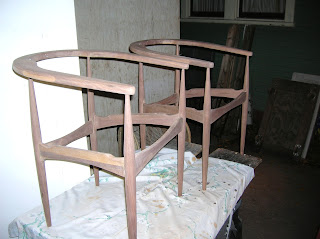 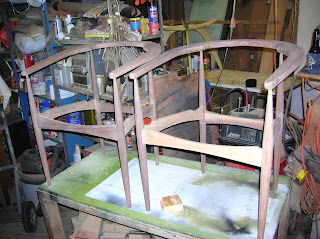 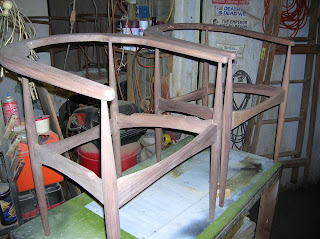 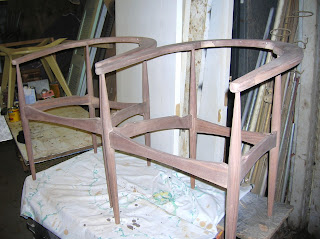 This has been one of the most daunting refinish jobs I've undertaken! Undoubtably, the frames on these are solid walnut. That didn't neccesarily make the job any easier. Whoever last refinished these put down a very heavy coat of white paint and had somewhat antiqued over the finish which was heavily embedded in the wood. I even resorted to some citrus stripper which turned out to be a major mess in itself. After way too many hours, here's how we stand currently with a bit of stain... 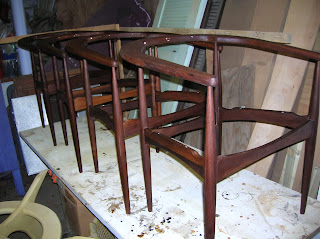 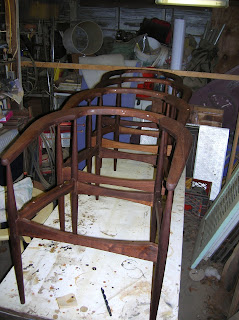 In the next couple of days these will get 3-4 coats of satin lacquer and should look pretty swell. I'm on the hunt for some appropriate upholstery as well to really make these pop! The table is on the bench and hopefully will be done soon as well. When I finally finish this set it should be totally stunning! Keep your eye on the prize and all the work will be worth it? I certainly hope so!
﻿
Posted by A Modern Line at 10:51 PM