Not necessarily in order we have first the finished H/W 1585 cocktail table that I acquired sans the drawer. With the drawer closed you would never know it's not original and hopefully that's not a major turnoff to someone that loves the lines of this great piece. 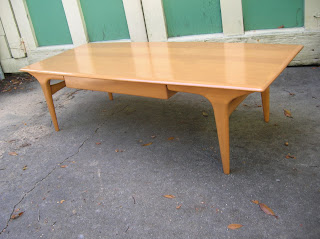 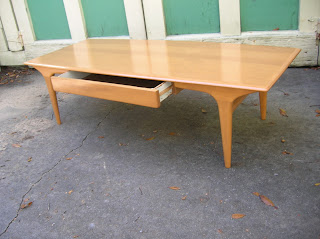 I think it was worth the drawer rebuild even if it's not original. I'm going to price accordingly with a disclaimer but it still looks really nice!!
I was forced to dig deep into one side of my garage for some louvered doors for a display and unearthed a donated table top that a consignor at our store was kind enough to pass along. A separate donation of some tapered table legs inspired me to go ahead and get this project moving in the right direction. Like I don't have enough to do already... At a glance this looks like it may have been from a H/W cocktail but I think it's just a nice knockoff, but it appeared to be solid birch or at least a nice cut of wood regardless. I think the legs are ash, but again nice wood and very solid. 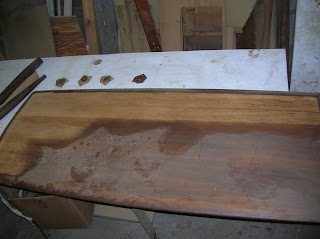 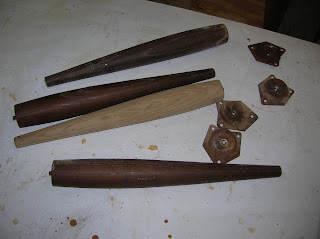 They didn't come to me together and it's obvious that the table top once had an apron all around and likely with bolt on legs. These pieces were certainly not candidates for a lighter finish as there was some embedded stain that just could not be addressed and I'm hoping for some success a bit darker. This is still going to be a very pretty table! 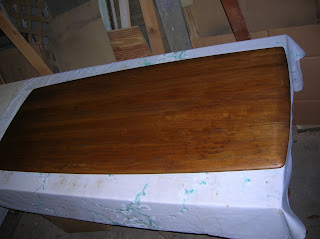 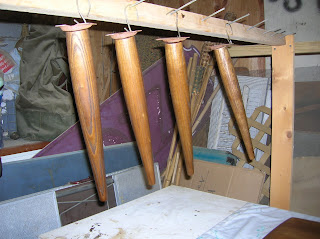 Last up a Plycraft chair that someone had sent me a request to take a look at. I'm pretty sure he retrieved it from going to the "big dumpster in the sky". Great save!! Thought not a donaton by any means, I went ahead and took off his hands for more than I'd would have liked and
I'm hoping for the best. I love restoring stuff and I hope I'm not in over my head on this particular piece. I'm for the most part a wood restoration person in the Heywood Wakefield vein, but I'll try my hand at anything I think I can save. I've worked on tons of danish and MCM stuff, but this was something new. Love a challenge!! 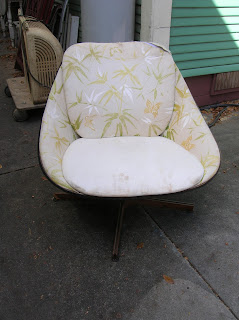 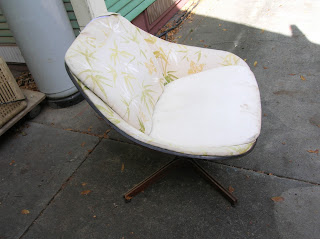 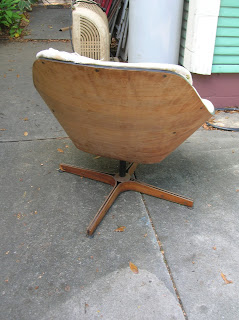 Seat cushion has been recovered at some point. Not exactly a professional job... Love the original fabric on the seats although it's way faded. The shell is very dried out and needs major attention. Still, it is an original Plycraft and the label is still intact under the seat. I'm guessing this will involve more than a post or two for the entire project. Structurally this chair is in good shape and very comforatable to sit in. Haven't seen one quite like it before and I'm already on the hunt for some farbic to compliment...I think some funky atomic print might be just the solution...
Post again soon...
A Modern Line﻿
﻿
Posted by A Modern Line at 9:50 PM