As promised, here are the Lane Acclaim tables ready for a new home. Didn't have room immediately for them on our sales floor so I threw them up on CL to see if they'd get a bite there. Turned out very nice!! 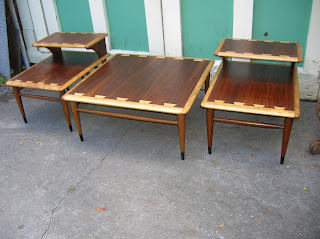 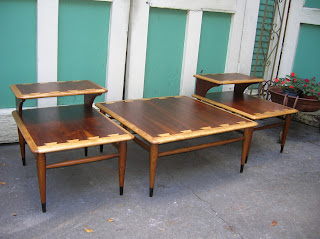 Next up is the Saarinen designed dining set that a consignor had brought to us. No, it's neither a Knoll or a Burke set and the chevrons formed into the seats don't appear to be consistent with the original design. The bases are steel construction not the original aluminum and the bases are a bit heavier and not as slender but it's a nice vintage set nontheless. The set is in really great condition with just minor paint chipping on the bases and it's in my wifes store for a reasonable price. 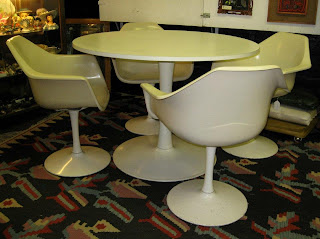 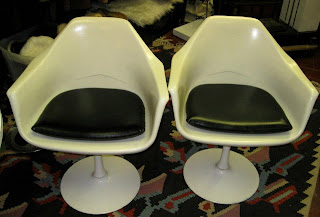 Last but not least is my current project of a Heywood Wakefield M1585G cocktail table that we had picked up a long time ago that was missing the drawer. I'm not sure how you misplace a drawer for your table but that's how we purchased and needless to say, they weren't asking a ton of money for the piece. The rest of the table was in reasonably decent condition with just some surface scratching and no major structural damage. I considered just replacing the drawer front as another apron and eliminating the drawer altogether but hey, people need places to stash their remotes and other stuff so why not  fix it?? 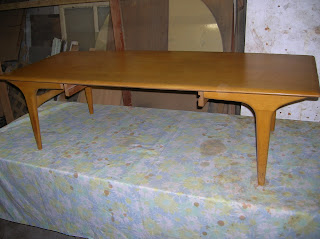 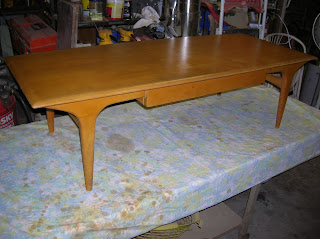 I love a challenge and building some type of functional drawer didn't seem too intimidating. Like I said, people like drawers and it might help sell the piece. Yes, I'm a packrat when it comes to saving anything that might be usefull and I had enough materials to put this together. Not that anyone would would mistake it for an original, but it's sturdy and functional and looks great if it's not open! 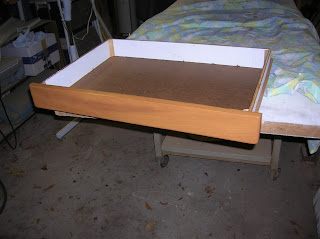 The birch facing was cannabilized out of an end (571) table that I had purchased many years ago that had been painted a chaurtruese green and appeared to be a good candidate for refinsihing but someone had recut the two "missing" back legs out of pressure treated limber. Hence the paint job! It's been reutilized for a couple of reconstuction jobs. Lesson learned about buying painted pieces! Still the wood was put to good use...The wood alone was worth the price I paid in the long term..very long term...Putting on the last coat tomorrow and hope to have finsihed pics up soon!
Thanks to all you MCM lovers and H/W people for taking a look. Post again soon!
﻿
Posted by A Modern Line at 10:01 PM