Hunt for new stereo console...Score!! and some progress on the H/W nesting tables...

We recently sold a vintage Oriental motif Magnavox stereo console that was in the store with sliding lids and had a hole to fill, and as stereos/credenzas of any kind are kinda hot right now, I had to go take a look across the bay at a CL posting. This was a dealer that had given me some decent pricing on some Heywood Wakefield pieces and some Lane tables. It was good enough so we both made some and were happy and sometimes that's all you can hope for. He didn't have as much wiggle room as I would have liked, but the stereo had such nice lines I couldn't walk away. 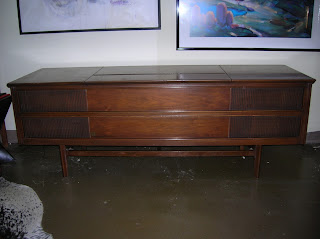 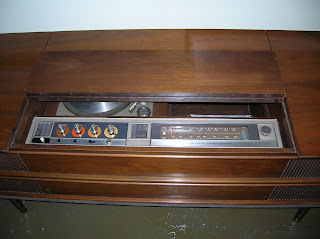 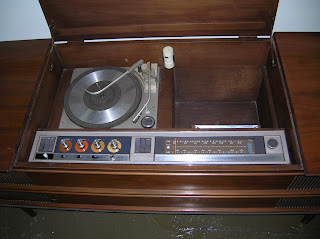 Cabinet was in pretty good shape with only some minor surface scratches and I'll clean them up and the interior tomorrow. Stereo works well, but turntable needs a little push to get it moving. Haven't had a chance to check the needle yet, but am guessing it's not perfect. Still had the original booklet and some maintanance paperwork from "71" from after the sale. Didn't have the original bill of sale, but I'm guessing late "70" or earlier. This too is a GE and although I can't say I likely got the great deal Mr. Mod got on his Granville GE it was good enough so it was worth the investment. There was also an Amercan of Martinsville 4 door credenza that was available, but it had some veneer issues along the edges and although a very salable piece, I was on a budget but did pick up a nice A of M 3 tier magazine table and three MCM lamps that need some TLC and some shades. Story of my life is working on one piece or another. Go figure!
Speaking of working on pieces, I couldn't resist starting on the H/W 312 nesting tables even though it was late and the neighbors probably are getting to hate the sound of my sander and compressor after I get started on a new project. 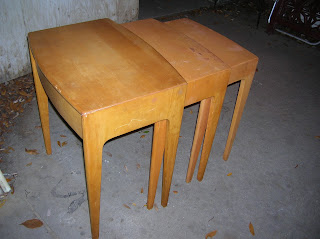 The smallest table has aprons front and back and the others are only aproned in the back of the tables.  I don't use chemical strippers and sand all the old finish off and thought these aprons were probably doweled to the sides. And I didn't want to have to totally disassemble because of the large wood plugs covering the screws from the sides to the top that I can't replicate. After a quick inspection I found that the geniuses in the design/engineering dept. had only screwed the aprons into place and I wouldn't have to tear down or slug through a bunch of hand sanding to make right. It's as if they knew that someday someone would need to take apart for repair or refinsihing and they made this furniture very user friendly. I've seen this time and again with all the H/W pieces. Got about two thirds of the way into the prep work last night and as I have to be in store tomorrow I won't get another chance until tomorrow night to keep moving forward, but should be able to get the first two coats of finish on by Thursday and done by early next week and in house. Here's how we look after the first couple of sand preps... 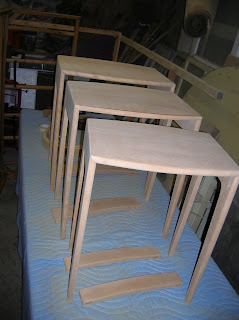 Tops had a few minor stains but I was able to work them out and these are going to be just gorgeous when complete! Next up will be the 50's Blond sofa or who knows what else might fall into my lap by then. Post more soon!
.
﻿
Posted by A Modern Line at 10:39 PM