One last post before the holidays...50's sofa update and some cool shades...

Didn't plan on posting again until after Christmas but thought some may have an interest. I'm working on a 50's blond birch sofa that we picked up on our recent roadtrip and have had some success getting back to new. If you've been following previously, this is very reminicent of the Heywood Wakefield Aristocrat line. Although not a H/W piece, it is still a very nicely made solid birch frame and hope to get the cushions back from my upholstrey pro next week or soon thereafter. 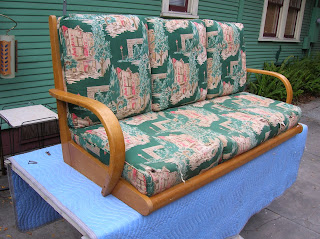 This is the sofa when we picked up in TN.
As stated in an earlier post I needed to remove arms and legs to get into the van for transport and realized it originally had a center leg that had been broken off and discarded. 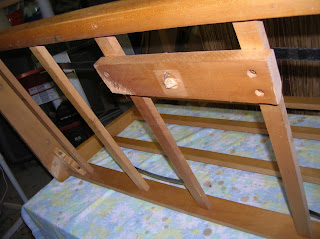 Someone had also given up on the original screws for the front legs after trying to fill with some type of putty and had drilled through the outside frame and had installed carriage bolts to stabilize. This fix was actually worse than a proper cure for the problem area. 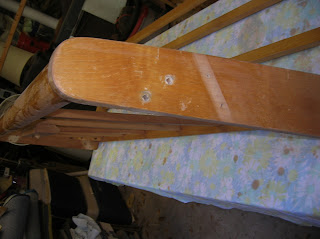 Now the drill through holes need to be filled to try and match the original finish. I ended up moving the front legs back about an inch or so from their original location under the frame to get back into some solid wood and this worked out fine. The remake of the center leg took me a couple of hours and a cannibalized leg from an end table that I'd already removed pieces from for other repair jobs. 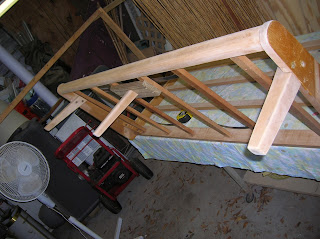 Had to remanufacture the cross brace and reshape the leg a bit and although a bit more delicate than the original legs for this sofa, I don't think it detracts from the appearance and may actually inhance a bit! After install I had to get it on it's feet to see if this would work... ﻿
﻿
Yes!!  It all sits level and is so far looking as planned! Now to the problen of filling the holes in the frame. Deep holes through the entire frame need to be mostly filled before I use a laquer stick to top off. I use "rock hard" powder that is mixed with water to fill larger gaps, although it's really not substantial enough to fill screw holes and expect it to hold. That said it works fine as a filler for these type of repairs. I have some lacquer burn in sticks that pretty well match my finishes and although not perfect, work for the smaller locations. 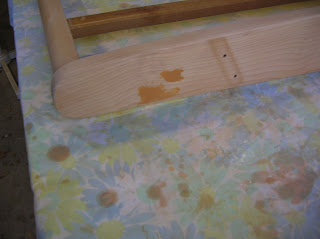 After sanding these out and the first coat of finish the original holes are starting to fade away. Won't ever be original but as close as I can get... 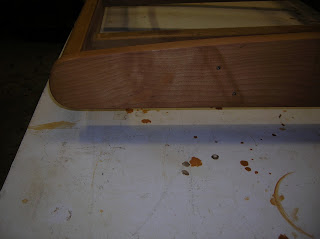 Should only get better as this is just the first of 4 coats of finish and hopefully be almost invisible after I'm done.
Just one more quick addition to the shade/lamps postings recently...
We have been collecting shades for a bit of time as these are almost always harder to find than the lamp bases. We always have people coming in to ask about shades for sale and as much as I'd like to accomodate, I really like our collection and hope for matching lamps. I really can't break up pairs of swell shades unless I had a couple of lamps that could use the same shade. 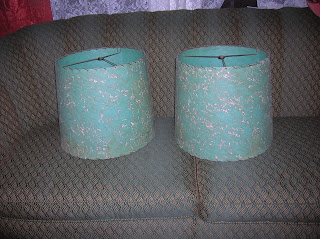 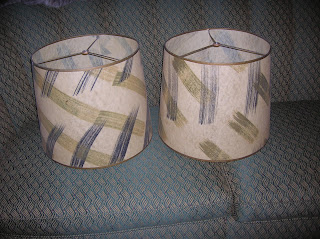 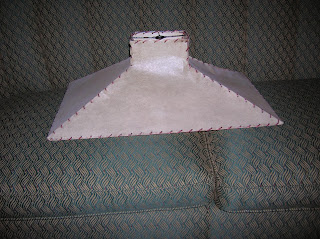 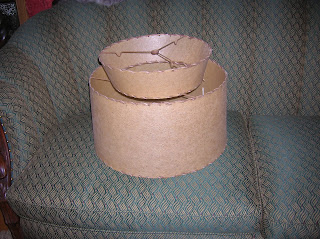 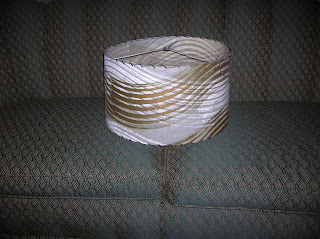 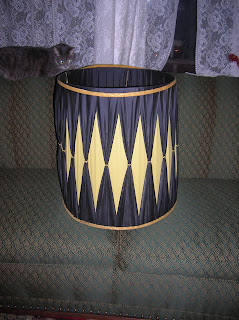 It's much easier to find the base than these shades and I'm guessing we may hang on to these for the short term for future lamp base aquisitions!
Here's once again wishing you all a very Merry Christmas and a Happy New Year! and may get a chance again to post before years end!﻿
﻿
Posted by A Modern Line at 10:46 PM