Here's a new one on me...Wythe-Craft furniture

I really hadn't planned on hunting for more projects but in perusing CL on Saturday using some of my normal keywords I came across a listing for simply "bar and buffet". It was very simply stated in the body it was a vintage solid wood bar and buffet. It sometimes pays to troll the most mundane listings and this time it was one of those "pay dirt" times. 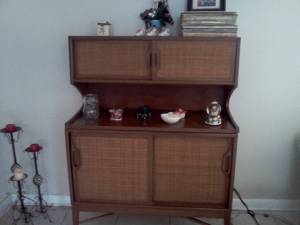 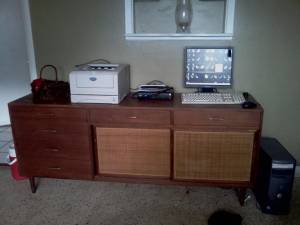 Needless to say, I was immediately hooked and e-mailed an interest as no phone was included in the listing and crossed my fingers. Finally received an e-mail back with a contact number and to call after 1 PM on Sunday. Five after one I was on the phone and minutes later I was in route with hand truck and pads already loaded! 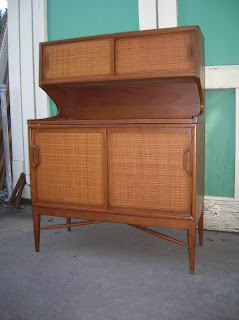 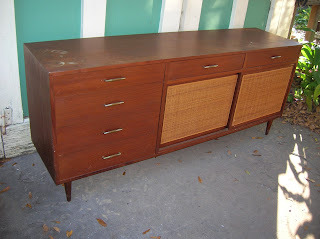 I didn't see any pedigree when I was loading but after getting home I discovered a cloth tag on the back of the bar base. Wythe-Craft furniture for the family room Wytheville, Virginia. 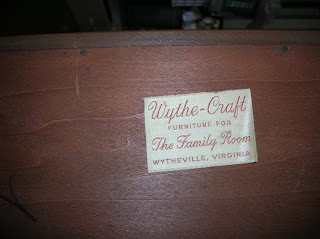 After researching in all the usual locations, I still don't know anymore than I did to start with. I found a completed sale for a MCM chair on 1st Dibs with no price and a couple of pieces that had sold on an auction site w/no pics. If any of my readers can provide some insight as to the company or any other info I'd be grateful.
Although not "solid" wood, these are very nicely made cabinets with a nice thick walnut veneer. Thankfully it's a nice thick veneer, especially on the credenza. This top was a mess and I initially had my doubts as to how much I could do for it. 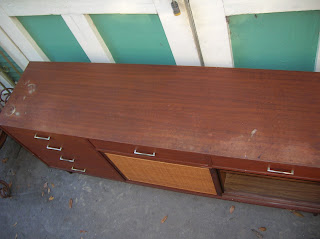 Like I said, I really hadn't planned on another project as I wanted to get started on some Heywood Wakefield bedroom pieces, but by default this turned into the project du jour.
The bar won't need to be stripped as it only has a few water rings that some steel wool, mineral spirits and some Restor-A-Finish should take care of. The credenza top was not even a question mark. It would have to be stripped back to bare wood and restained. 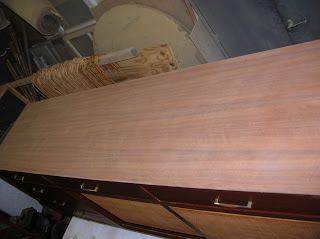 I have to say I was pleasantly surprised by how well this came out up to this point. Some of the stains and rings were pretty deep in the top, but fortunately they gave way before the veneer was compromised. About 4 hours later I had the bottom sections cleaned up and restored nicely and had finished the final sanding of the top. I did manage to get the top restained but neglected to take an after pic so it will have to wait for the next post along with a tip many of you in MCM refinishing world may appreciate.
I was reading Mr. Modtomics blog -  http://mistermodtomic.blogspot.com this morning about a nice Broyhill desk he had scored and was asking for other styles of MCM Broyhill Premier line. I recognized his desk right away as a Saga series as I had recently restored this nice room divider which promptly went to a new home. 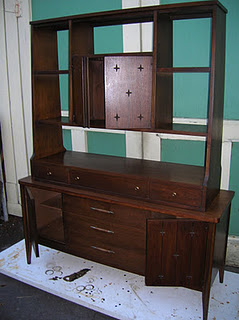 Here's another line from Broyhills Premier series, the Modern Classic style. This is even more understated than some of the other sets but still has really nice MCM lines. Don't have the table and chairs anymore as some one else loved them too, but still have the china available. Note the vertical lines on the Y-shaped pedestal base match and the matching lines on the china. Classic Modern indeed! 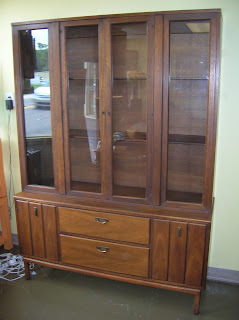 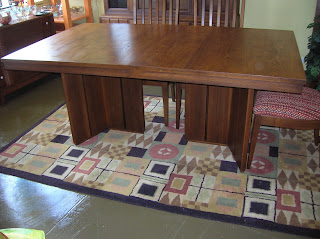 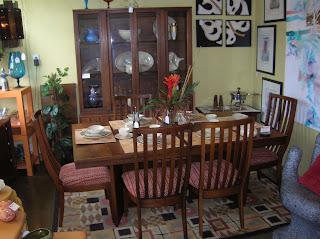 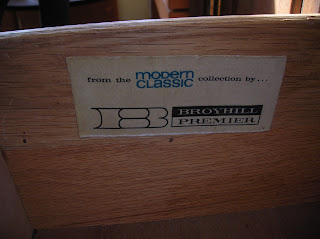 I should be back on the blog train again in the next couple of days. Just a reminder to give me a heads up on the Wythe-Craft if you have something useful to share or link to. Many thanks.....
Posted by A Modern Line at 4:34 PM