Something for MCM fans to look forward to in Tampa and other incidentals...

This has been in the works for about a month but we couldn't contain the news any longer. As I alluded to in my last post we here at A Modern Line have been partnered with an interior designer in a soon to be dissolved affiliation at "Kaleidoscope for the home" here in Tampa. I don't regret giving this a shot for the year we have been together. My partner has one of the best eyes for texture, color and placement that I've seen and we've always had compliments on the appearance of the store. She is indeed a pro at what she does. That said, we have some disagreements on the mixing of mid-century with more eclectic offerings. The current incarnation "Kaleidoscope for the home" will be moving to a new location across the bay to a new location in St. Pete and we here at A Modern Line we be retaining our current space here in the Seminole Heights area of Tampa @ 6415 N. Florida Ave. 33604 with well, the obvious moniker, A Modern Line! Signage is in the process with our new logo: 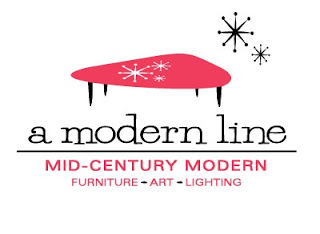 We had a nice write up on our local web news Patch.on the transition and if you have an interest you can take a look here: http://seminoleheights.patch.com/articles/kaleidoscope-leaving-modern-line-staying
We are commited to all things mid-century modern going forward although we may throw in some complimentary articles from time to time. If you live in the area, we will still be considering consignment pieces that fit with our new look!
Here's just one shot of the new look. I will post some more of what we have to offer going forward as spaces are vacated and we get a chance to set up the upcoming changes. I am so looking forward to our "getting it together"! 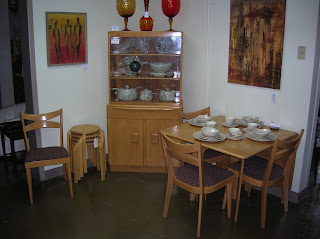 What's not to like about a complete set of Red Wing "Bob White" china with almost every serving piece available on a completely refinshed Heywood Wakefield dining room?
As far as "needing" pieces, we still have some holes to fill after the change over and I've been working on everything from upholstery to case goods to fill holes.
I was really, really going to go to storage and pull some H/W pieces to start on although I already have some ready to go in, and then I got a call in the last couple of days from a friend and future consignor that this piece was available for a very reasonable price at an estate/yard sale. It was an elderly woman that was either going to assisted living or a relatives home and it was just around the corner from the store. It was kind of a sad situation as the son had been putting in the whole day trying to divest of the contents of the house. This one particular piece was in a back bedroom and was the only redeeming find in the home: 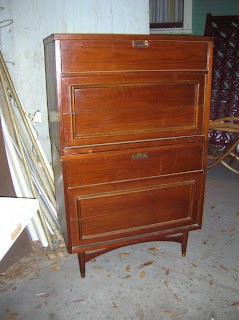 Really like the lines of the  piece but there was something odd about the configuration. Looks like a stacked unit and it was. The seller was surprised I recognized that it was in two pieces, but it seemed obvious to me. This piece was a good example of good intentions gone bad! I can always move MCM chests as there are lots of people looking for a narrower high piece to fill their spaces, but this was a hybrid of two bachelor chests. One had obviously gone through some kind of major trauma and completely lost it's legs. What a shame! 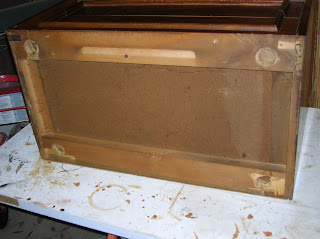 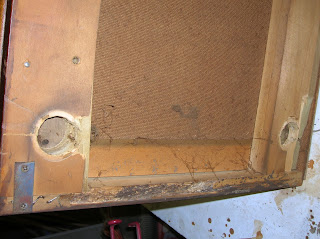 Although missing only one small chip in the veneer on one of the pieces, this was was a basket case and would likely have found it's way to the landfill without my intervention. It was absolutely filthy and the finish was sticky to the touch. I feel sorry for the previous owners that they lacked the means to care more for it. It really is a nice piece of furniture and I guess I was the guy lucky enough to save it! Here's how it looks pre-restoration... 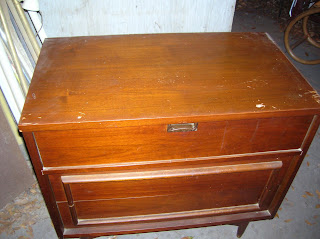 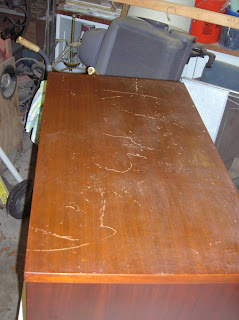 I had to fix some stuctural flaws before cleaning. Some separtion in the case that need to be clamped, glued and nailed back together and the topside chest had some major scratches to contend with. 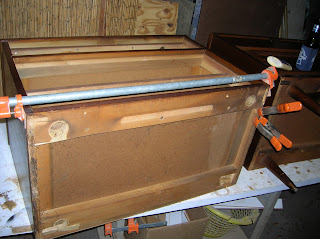 Here's how it's looking after some TLC with a mineral spirits bath with some steel wool and some Restore-A-Finish. 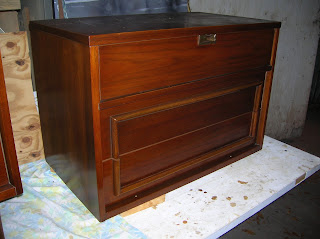 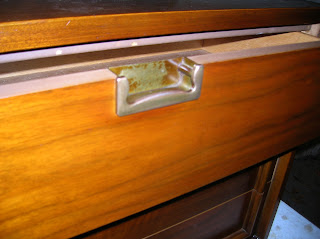 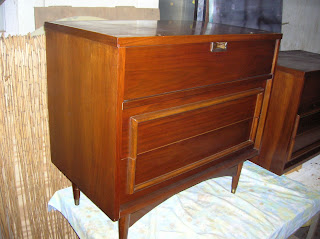 I honestly thought the brass had been painted black until I cleaned it up. It was really that filthy! Now for the top of the top section. Major scratches to be dealt with but the veneer was pleny thick and could take a bit of abuse to get rid of them. 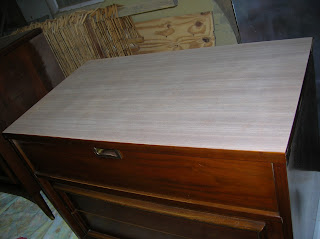 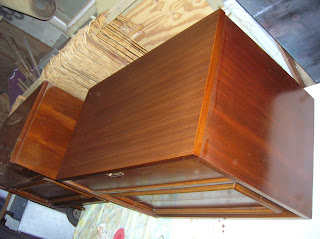 I'm quite happy with the results so far and will post again soon about the finished piece along with news on the transition!
Posted by A Modern Line at 11:32 PM